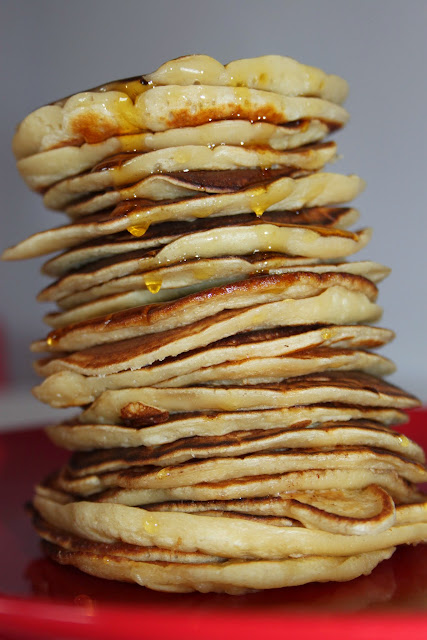 A while ago I made some pancakes and even if they were not as thick as I wished, they were really nice. Looking for a recipe I was submerged by american ones and their total absence of metric units... which seriously gets on my nerves. So by the time I finally found one and bake them, I engulf most of those as a reward !

The recipe:
100g flour + raising agents
1 egg
150mL milk (originally ''buttermilk'' but I used half-skimmed one)
1 tablespoon cane sugar
1 tablespoon oil
flavoring (vanilla for me)
Pour all the solid ingredients in a bowl, add the egg and mix then same with the milk - gradually.
Cook in a hot pan until the bubbles forms on the surface. Then flip them over for a short time and reserve in a stack. Spray a small amount of butter while making the pile and serve with maple or golden syrup or honey.

Email ThisBlogThis!Share to TwitterShare to FacebookShare to Pinterest
Labels: Cuisine